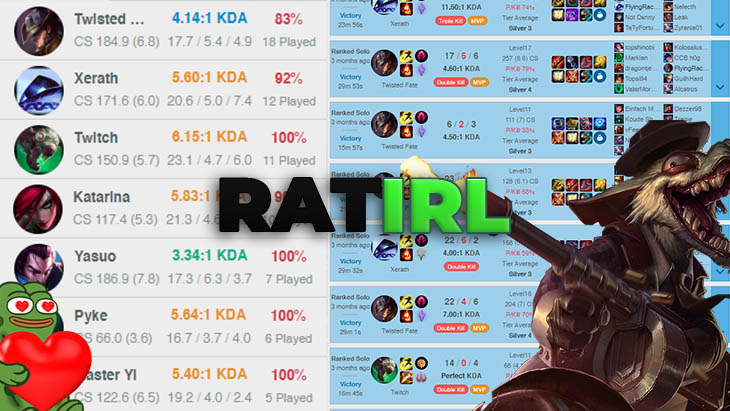 Who is RATIRL? Founder Of L9 and Disco Nunu

Most seasoned League Of Legends players have previously encountered other in-game players rocking the L9 tag or generally having L9 in their name. If you're sleeping under a rock and don't know what the tag is all about by now, L9 is a controversial club of infamous high ELO boosters, mostly originating from the EUW region. In this article, however, we'll take a deep look at their most infamous and popular member, RAT IRL.

The entire L9 and RAT IRL himself are notorious for being very toxic in-game, as well as intentionally feeding if something goes wrong or if they dislike somebody on their team. Despite that, most L9 players are renowned for their skill and most of them are challenger or grandmaster players at least.

Their most recognizable and popular members are Ap0calypse, RATIRL, and Obsess but there are many other high ELO streamers that are affiliated with this club. To put things into perspective, Fnatic's current jungler Selfmade was heavily associated with L9 before joining the professional League Of Legends scene. However, in the following article, we will be focusing on RATIRL's League Of Legends career and how he became so notorious in the community.

RATIRL first diamond and challenger in season 4 on fresh unranked accounts with a 90%+ emerged on the high ELO League Of Legends scene after reaching high win rate on his Twitch jungle.

As his name suggests, RATIRL is a Twitch OTP and his Twitch became a trademark jungle boosting pick over the years. Reaching high diamond and challenger with absurd win rates at the time was no small feat, given that master and grandmaster didn't exist yet.

Additionally, the old client in season 4 had a feature that allowed players to spectate high ELO matches live and many people watched him play Twitch jungle at the highest level. RATIRL's gameplay alongside his toxic persona attracted many fans who wanted to be just like him, and he slowly gained notoriety in the community.

Together with Ap0calpyse and a few other toxic high ELO players, he created the L9 (Low-nine) club that was a platform for boosting and occasional win trading in high MMR. In the next couple of years, RATIRL got permanently banned on numerous accounts for extreme toxicity to other players in chat. In most instances,

RATIRL would write extremely racist and offensive messages that often got exposed on stream as he was mostly playing in high ELO. He also insulted and disrespected other streamers and content creators as well, most notably Dekar who he had a Twitter quarrel with as well. Nevertheless, he managed to reach 1000+ LP occasionally, proving that he is a very skilled player despite his attitude. He was often seen on pro players' streams absolutely dominating the game, which grew his fan base even more as a result. 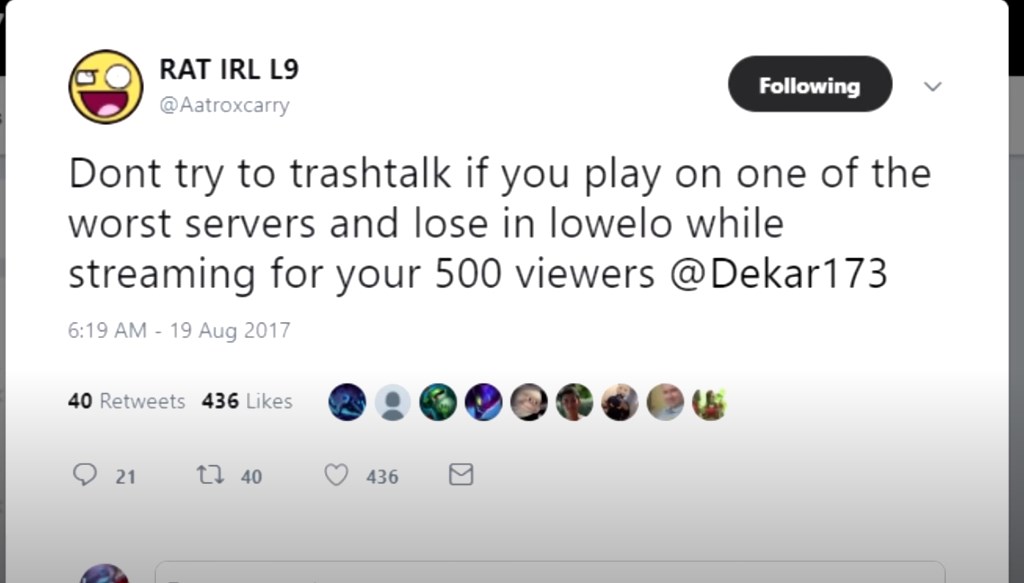 As we previously mentioned, RATIRL is best known for his Twitch gameplay, particularly in the jungle role. He popularized Twitch as an aggressive assassin-like jungler who was before seen only as a scaling ADC.

Additionally, he can be often found lurking in the enemy jungle, where he'll fight the opposing jungler and steal his camps to further push his advantage in game. Generally speaking, his playstyle is aggressive and unpredictable, making him a scary opponent, and he was often referred to as the best Twitch player in Europe.

There is a very popular clip in which RATIRL invades the opposing red buff as Yi toplane and 1v2's the enemy jungler and toplaner with his ghost ignite strategy. Last but not least, he can be also seen playing Xerath mid occasionally, as his kiting skills nicely transition into hitting skillshots with a midlaner such as Xerath. Last but not least, he sometimes plays Cassiopeia, as her kit is similar to a mage-ADC which compliments RAT's skillset.

He won a one-on-one duel with Perkz who is considered to be one of the best midlaners in the world, with Perkz praising RAT's Cassiopeia gameplay on stream throughout the game.

There is a very popular clip in which RATIRL invades the opposing red buff as Yi toplane and 1v2's the enemy jungler and toplaner with his ghost ignite strategy. Last but not least, he can be also seen playing Xerath mid occasionally, as his kiting skills nicely transition into hitting skillshots with a midlaner such as Xerath.

Overall, his skill is on par with some of the best junglers in EUW and there is no doubt that RATIRL is mechanically very gifted.

That being said, some criticism on his gameplay stems from the fact that he'll often troll and throw the game if things don't go his way. He is the type of player who'll either hard carry the game or just intentionally feed to get it done, so he can try hard carrying again which can be seen through his in-game names that often referred to him 1v9ing. Generally speaking, people who are matched with him are often frustrated because the game's outcome often depends on his mood.

Ap0calypse and RATIRL also introduced the Disco Nunu strategy in which they'll run it down mid and feed until the game is over. All in all, while RATIRL is a very gifted player, he has a problem with his toxic attitude and mentality that held him back over the years.

At this point, you might be wondering where the type of player like him ends up, and that would be a good question to ask.

Given his history in eloboosting, getting permanently banned on several occasions, and saying extremely offensive things to his teammates, it would be rational to expect that his League Of Legends career failed miserably. However, that is not the case in this situation.

Around mid-2019, RATIRL decided to fully reform his behavior and focus on his Twitch streaming career as well as making full-time YouTube content. While the majority of his fan base was initially attracted to his edgy persona that simply has no place in League nowadays, he does have a lot of fans that simply enjoyed his gameplay and personality when he isn't trying to lose games and insult other people he's playing with.

He acknowledged that and started making content and streaming full-time while trying his hardest to reform and stop being toxic towards other players in-game. Around July 2019, he started using a microphone when streaming as well which further pointed out his charismatic personality. Day by day, his fan base grew, and he became one of the most-watched LoL Twitch streamers, having almost 400k followers on Twitch at the time of writing.

He regularly hits over 1k concurrent viewers on his Twitch streams, with those numbers reaching and exceeding 10k on a good day. Additionally, he regularly gets over 100k views on every single one of his YouTube videos, while having almost 150k subscribers at the moment.

The majority of his content is revolved around getting fresh level 30 accounts to challenger playing the best smurf champions and stomping low ELO which was his specialty since season 4.

Nowadays, he does it without the toxic chat and with a dedicated audience that loves to watch him play League. All in all, it has been quite a journey for RATIRL, who today makes a living doing League full-time, which is a delightful thing to see given his toxic past. It further proves that anyone can change for the better and that good things come to those who focus on improving themselves.

What does RATIRL Look like? The face of RAT IRL

A question people constantly ask is, what does RATIRL look like in real life?

Well, no one really knew what RATIRL looks like in real life until very recently when another famous twitch streamer IWD (IWillDominate) also known as Christian Rivera leaked a Snapchat sent from RATIRL on his stream, because we believe in anonymity we have decided on not including the image in the article, however it is very easy to find it yourself with just a few google searches.

Whether RAT IRL will do a face cam stream one day or not is totally up to him, but I am sure we are all eagerly waiting for it to happen, so if you're reading this Anton, it's about time!

If you are reading this article, you are most likely familiar with the RATIRL sound, it consists mostly of high tempo psy-trance and electronic music.

If you haven't been living under a rock the past few years and not heard his famous outro song on his YouTube channel, we did a favor and embedded it here below, you can even go to the YouTube video for the song and read the comments where everyone is commenting RAT IRL related comments.

You can find his whole playlist here: https://www.youtube.com/watch?v=Z90WpYdOKrM&list=PLy6N_9yB8Qwy6LL0J7zLUyW8XNX-BPeDl