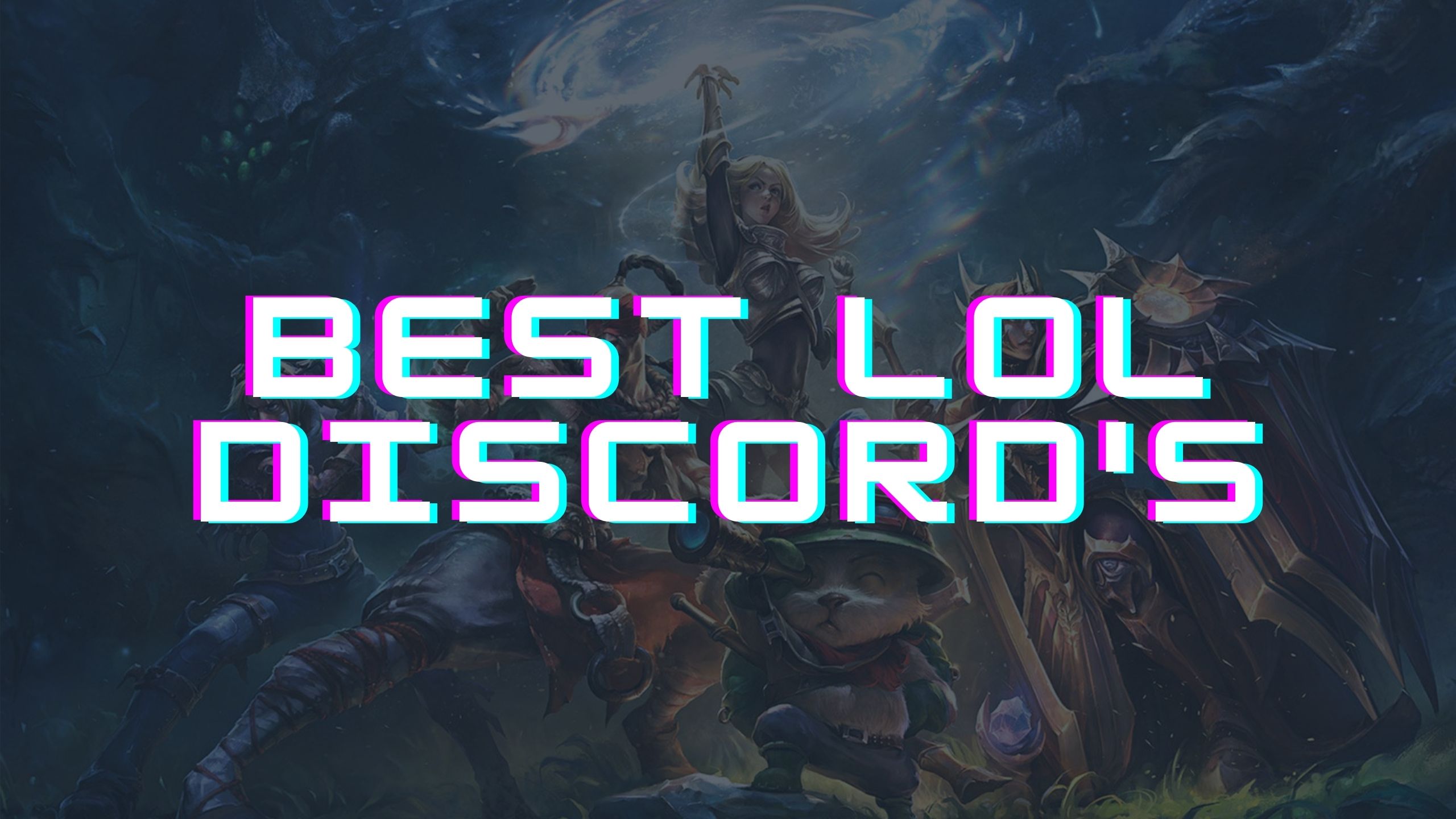 In recent years, we've seen millions of gamers worldwide gravitate towards using Discord, the most popular platform for text and voice communication. The main selling point for this application is that allows gamers from all over the globe to enter real-time calls while they're playing their favorite video games. Low-latency, reliability, interaction with other users, sharing memes and funny images are just some of the cool features Discord has nowadays. League of Legends gamers, in particular, embraced Discord and created thousands of interactive server-communities where every gamer can participate and hang out in. That's why, in the following article, we will take a look at the best LoL smurf Discord servers as well as best LFG Discord servers, and servers that focus on educational content for beginners.

What you need to look for when joining a Discord server

Like we previously mentioned, Discord servers are more than just a place to join voice calls, they are a platform where you can share various forms of media and interact with other  users. Therefore, before we take a closer look at both the best LoL smurf Discord servers and the best LFG Discords, we'll analyze the things you should consider before joining one.

These are the criteria the server you're joining needs to meet:

⦁ The staff that will prevent and punish verbal abuse

⦁ A place where you can learn more about the game

⦁ A technically polished server with channels for each activity

It may come off as a bit pompous to put ourselves as both the best smurfing and educational Discord server out there, but we have a good reason for doing so. Best LoL smurf Discord servers are extremely overpopulated today and it's hard to find a trustworthy community where your voice can be heard and where you can be treated as a human being, instead of a Discord username.

That's why we believe that our Discord server is a perfect place to hang out for both smurfs and beginners as well. It's crucial to understand that interaction is one of the key parts of creating a long-lasting community, and that's what we strive to achieve.

One of the best things about our Discord server is that it is welcoming and friendly, allowing you to talk and discuss League of Legends one-on-one with Challenger players and streamers, no matter your rank or server. We give you the opportunity to learn the game from the best of the best, whether it's from watching their streams, or getting personal advice on improving your game. Our Discord is affiliated with some of the best Challenger streamers on the platform, most notably Katawina, Exos, and Colingogo. All of those players are seasoned high-elo veterans and smurfs who you can personally talk to and interact via our Discord platform.

On the other hand, if you're a high elo player yourself, you'll get the chance to meet and play with other smurfs you meet on our Discord server. We feel our server is best for smurfing as it provides you with a platform where you can meet other friendly smurfs and Challengers who you can climb together with. Our mission is to create a sociable community where you can make long-lasting friendships with other smurfs and casual players who hang out and interact through our server. That's why we feel our server is currently the best smurf LoL Discord server, as well as a place where beginners can learn from top-tier players worldwide.

Some of our best pros are:

⦁ A plethora of other players of any rank, anywhere from Bronze to Challenger

⦁ Daily giveaways which include amazing prizes such as free smurf accounts

If you haven't been living under a rock for the past couple of years, you've heard the name RAT IRL or his famous organization L9. Their club is one of the most notorious smurfing socities in the world at the moment, and correspondingly, their Discord server is one of the best LoL smurf Discord platforms. RAT himself is a player that loves to embark in unranked to Challenger challenges, so it should come as no surprise that there are many smurfs and high elo players hanging out on his server. To be precise, there are thousands of active users on this Discord server at all times, making it easy to find a fellow smurf you can desolate low elo with. There are also tons of popular streamers such as I Will Dominate and pro players such as Crownshot and Obsess that are members of RAT IRL's server and that occasionally visit the platform. Additionally, there are voice channels for anyone who's looking for a duo partner, which is a great way to meet new friends you can play with. All in all, RAT IRL's server is one of the best LoL smurf Discord servers, only hindered by its own overpopulation and crowdedness.

If you've kept track of the top players in the North American solo queue ladder over the years, you're very familiar with the name Tarzaned. He is basically crowned as the king of solo queue jungling on NA and has reached rank 1 on numerous occasions over the last couple of seasons. His smurfing is also world-renowned as he has reached Challenger on several smurf accounts with amazing winrates as well. Consequently, he created one of the Best LoL smurf Discord servers where his audience, fans, smurfs, and high elo players engage in fun conversations about League. You can certainly learn a lot about the game while interacting with people on the server, as there are many experienced veterans discussing the game and competing against each other. Tarzaned himself hosts numerous tournaments where high elo players and smurfs get to play against each other and show off their skills. Just like RAT IRL's Discord server, you'll find dozens of smurfs hanging around, talking about League, and queueing up to play solo queue and climb. That being said, the only potential disadvantage Tarzaned's Discord has compared to the servers we've previously talked about is that Tarzaned's audience, much like himself, can be arrogant and toxic at times, which is a factor you need to take into consideration before joining his server. Overall, Tarzaned's jungle is still one of the best LoL smurf Discord servers as well as a great place for any beginner to learn more about the game.

Moving on, we'll talk about one of the best places to learn more about League of Legends, named League of Mentoring. Around 4 years ago, a couple of Challenger players and high elo smurfs came up with an idea to create a server focused on helping new players get into the game. That's how League of Mentoring came to life, with the intention to help newbies get better at League for free. Anyone who is Diamond III or above can apply to become a coach for the site and share his/her knowledge about the game. League of Mentoring offers voice call coaching, VOD reviews, and general discussions about the current state of the game as well as the best strategies going forward. The community is very friendly and if you're a high elo player you can find smurfs you can queue up with frequently, as the community is very open to players of all types of skill. Overall, League of Mentoring is a stellar choice for anyone looking to learn more about the game, whilst remaining one of the best LoL smurf Discord servers.

Our fifth pick is another server that focuses on educational content named A7 Coaching. Much like League of Mentoring, after completing a small procedure, A7 Coaching Discord server provides you with free coaching, game reviews, op.gg reviews as well as coach comments on builds, strategies, and match history. Additionally, there are other cool features such as a text channel where everyone who gets coached shares their progress and talks about the story of their climb with other players. Just like League of Mentoring, you can look for high elo players and smurfs you can climb with, meaning A7 Coaching is both one of the best educational and smurf Discord servers out there.

Yes, it's us at the #1 spot again. I promise you that we have a good reason to be here though. We've previously mentioned how overpopulation of some servers leads to a lack of meaningful interaction. Some Discord servers are simply overcrowded and it's hard to meet new friends. Well, a growing active server such as Turbosmurfgg's allows you to make real friendships and feel welcome with friendly members and staff. It's very easy to find an active group of players of any rank/server through our Discord text channel that is catered to finding the perfect duo partner. Additionally, it's worth mentioning that there is a large number of smurfs on this server, meaning that you can find the person to duo climb with in no time. All in all, no matter your rank or background, you will certainly find a friendly group of players you're looking for on our server.

Moving on, we'll take a look at two LFG Discord servers where you'll find your group the fastest, those being the official EUNE and EUW Discord servers. These platforms boast a large number of other options and possibilities for players to explore, but the main one we'll be focusing on is the LFG segment. These Discord servers have thousands of active users that look for groups and duo queue partners, meaning that you can find the partner you're looking for quickly and reliably. That does come with a price though, as these Discord servers do suffer from overpopulation and their members aren't as friendly nor welcoming as the ones we've previously mentioned. That being said, due to its activeness and the ability to find a group quikcly, the EUW and EUNE official servers make the #2 spot for the best LFG Discord servers

The last entry on our list is reserved for the most popular ARAM-only LFG Discord server named Poro Nation. Generally speaking, the server is catered specifically towards casual players that enjoy playing ARAM with strangers, which is a great way to meet new friends in a relaxed setting. It is filled with numerous text and voice channels where the members share memes, interesting Youtube videos, chat, and play other games as well. Additionally, some roles help differentiate trustworthy members of the server from new ones, which can be useful if you want to play with some reliable. There are some setbacks though, primarily because the server is mostly ARAM-focused and casual, which can turn off hardcore players that prefer a competitive environment instead. Overall, Poro Nation is still a solid pick if you're looking for a friendly LFG Discord server.